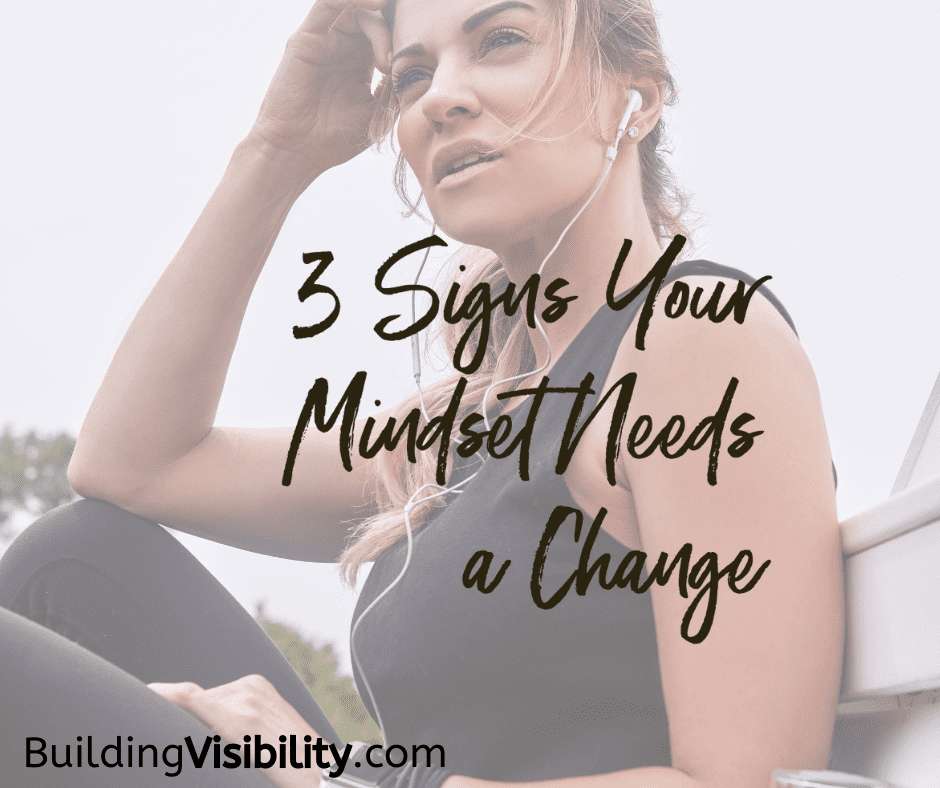 A negative mindset can keep you stuck and unable to grow your business or reach for more success. And sometimes, you can lapse into a negative mindset and not even realize it. But, there are always signs that can help you recognize it if you’re willing to look. Here are 3 signs that your mindset needs a change.

You expect the worst (and usually get it!)

Ever heard the saying “hope for the best, but prepare for the worst…” People think they’re being wise and pragmatic when they say things like that. But, in reality what they’re really saying is that “I expect the worst. . .”

And, despite what you might think, expecting the worst isn’t really helpful. It doesn’t make you stronger and it certainly doesn’t prepare you for good. It just attracts exactly what you were expecting . . . the worst. And, of course, makes it more likely that in the end, you’ll have something else to complain about.

Think about that. And the next time you’re about to recount some awful experience, ask yourself if you went into it expecting a bad outcome. If you did, there’s a pretty good chance you accidentally created the situation without realizing it.

You can’t remember the last time you tried something new

It’s easy to get stuck in a rut and not realize it. You might have released an e-book or course that was really successful. And, maybe being smart you followed that up with a bunch of similar products that let you coast on your success.

But the thing is, part of having a healthy mindset is challenging yourself regularly. That means doing some things that are outside your comfort zone, stretching yourself. That can be as simple as offering a different type of product sometimes. Or reaching out to an event coordinator about speaking at their event. Or participating in an affiliate contest. Something, anything really that forces you to look at your business from a different perspective and brings in new growth personally and business wise. Because if you’re not growing you’re standing still and eventually you will be left behind.

My friend and mentor Kelly McCausey runs a stretch yourself challenge every year in September. The challenge gives you the option to  participate live or just grab the guide and do it as a self-study anytime.

You blame others for your lack of success

When we’re in business for ourselves we have to make a lot of choices every day. And each choice has consequences of some sort or another. Of course we hope it’s going to be a “good” consequence. That our choices will work out in our favor and give us the results we wanted. Unfortunately, it doesn’t always work out that way. Then you have to dust yourself off, and figure out what you needed to do differently so you get those desired results next time.

But some people never acknowledge that their choices have any relationship at all to their success or failure in life or business. They seem to always have a handy list of reasons they’re not successful they can just pull out of their back pocket. Ask them a question about how their business is going and next thing you know, you’re listening to a litany of reasons why they haven’t succeeded. And, it’s always someone else’s fault.

The truth is business owners like that won’t ever succeed because they’re refusing to take responsibility for their choices. And, you can’t better yourself or your business until you’re willing to own your choices.

I really like watching talent shows when I can, especially when it’s focused on singing or dancing.  One time I was watching an episode of Ametican Idol and this young woman came in that was really friendly and outgoing. She joked with the judges and treated them like old friends and they were pretty impressed with her. . . until it was time to sing. She messed up the first take, but they gave her another chance, in fact they gave her two more chances. And all in between her attempts to sing, and her resetting and before and after she started and finished each take, she said “I’m not ready.”

She had a pretty good voice, you could hear it. And two of the judges decided to let her go through because of how she had come in. But the third judge didn’t. He said, “you have a good voice, but you’re not ready . . . you’ve told us that at least a dozen times. I’m gonna take you at your word. It’s a no from me.”

Ultimately, changing your mindset is about tuning into your thoughts and really listening to them. If you don’t like what you’re hearing, then it’s time to do something about it. A really good place to start look is with an e-book about mindset. You can also consider joining a mastermind , taking a course or booking a session with a mindset coach.

People often think of mindset conversations as just being too woo woo, or at the very least, optional and not really necessary for a successful business. But, nothing could be further from the truth. For better or worse, you are shaping your mindset daily and it affects everything you do.

Please log in again. The login page will open in a new tab. After logging in you can close it and return to this page.